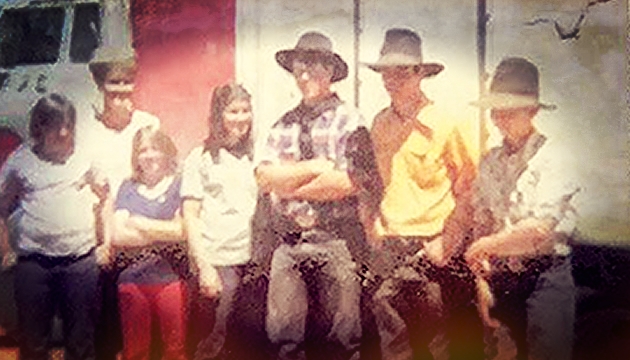 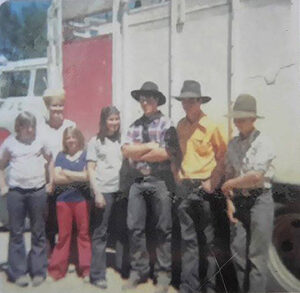 The Bruneau Sage Riders (left to right) JayDene Prow Aquiso, Marilyn Black, unknown (red pants), Ann Black Rutan, Paul Miller, Martin Black and Jace Prow.
Forty years later both Bret Black and Paul Miller are active in the livestock business and both have excelled in showing stock dogs. Two others from that class, Martin Black and Ed Robertson have made their mark in the horse world.

In 1961, when Ray met Tom Dorrance and began his quest to “get it,” as he referred to his striving to understand Tom’s communication with his horses, the search was on to find new words and phrases not previously in common usage in the horse community.

Tom’s way was not the “jerk & spur” we had become used to seeing. The emphasis now was on the rider’s, or handler’s, ability to, as Tom said, “observe, remember and compare”, and the bottom line ‘consider’ the horse’s needs. Old “force and fear” were past avenues. “Make it happen” was traded for “let it happen” and “make the wrong things difficult and the right things easy” became a saying little 4-H kids were using.

Although Ray and I were not raised in the same town, we were raised in the same period of history. We were children during a major depression and teenagers during World War II. Those periods of shortage and lack, in our little corner of the world, at least, produced a gut feeling of the need and importance of sharing. We were for sharing food, fun and ideas. We saw Tom Dorrance with great new ideas for making the horse’s, the buckaroo’s, and the rancher’s life easier.

Since our family’s living was tied to horses, it was natural for these new-to-us ideas to be of interest to all of us.

When Ray met Tom in 1961 the family lived in San Benito County, California. Ray was making the family living starting colts, riding outside horses, doing buckaroo work by the day, and shoeing horses.

The southward exodus had began in 1950 as the family left Idaho, when Ray went to work that spring on the wagon for the T-Lazy-S out of Battle Mounting, Nevada. The move to California was five years later. The move to California from buckaroo life in the Great Basin was a much bigger change in the lifestyle than the Idaho to Nevada move had been.

Suddenly it was no big distance to anywhere and you would likely see more folks in one day than you used to see in a month. With outside weather almost all the time, folks could lean on the corral in a shady or sheltered spot and talk a lot about horses. They would talk horse genetics, horse history, horse problems, and possible solutions to problems.

From the time Tom helped Ray with his “Honda” horse in 1961 until the late 1960’s, and beyond, Ray kept in contact with Tom. They got together a bit from time to time to work with a corral full of problems Ray had collected, and they visited some on the phone. Whatever Ray learned, he was always eager to share with other riders.

The late 1960’s found us once again in Nevada at the Horseshoe Ranch in Beowawe. Elko, Nevada, was again our closest larger town.

The Horseshoe Ranch was a long established cattle ranch, bought to continue as such, while it became home for some renowned horses. The horses were hunters and jumpers well known in competition that were owned by Mrs. Day and trained and shown by Gene Lewis.

At the Horseshoe Ranch, Ray rode ranch-owned horses and his own horses he had brought from California. It was here we lost our Honda horse, to an unusual feed problem. Honda was doing well in the bridle at that time.

There were two things especially that began during our time at the Horseshoe Ranch which were carried on into the events of the next decade.

Ray continued to keep in touch with Tom and felt like he was beginning to understand and apply more of Tom’s philosophy. Also, it was beginning to be easier for him to verbally share some of his understanding. That worked well as friends in Elko and Lamoile, who were leaders for groups of young riders, wanted help with their horse projects. Days on the ranch were always busy, but there were Sundays, and sometimes long summer evenings.

While we were at the Horseshoe Ranch, Gene Lewis would sometimes be gone out of state in a teaching situation in his field of expertise. He used the term “giving a clinic” for these events.

Fast forward from Beowawe back to California, Salinas Valley, Fat City feedlot, then back to starting colts, riding outside horses, doing buckaroo day work, and shoeing horses, plus working with small groups of mostly young riders and their problems.

Then a spring day in 1971, showing a sale prospect, a slick spot, the horse fell and life’s direction was changed again.

An offer came through connections of a friend in the San Joaquin Valley in California, a community college in Lethbridge, Alberta, Canada, needed an instructor for a summer equine program. Ray, then on crutches, in a complete cast, responded; “If you can use a man in a cast to his ass, I’m your man!” He went the end of May.

Like many other learning experiences, attempting to explain what you do physically to get a certain response from the horse without the ability to do it physically, Ray found to be a stretch.

When the cast was gone in mid-summer Ray couldn’t believe how much he had learned being “handicapped”.

It seemed the new ideas Ray had been exposed to by Tom a decade ago began to become clearer by the day. And each day brought new people into Ray’s life eager to learn. Ray began to work with more riders and their horses versus working with rider’s horses.

The natural outgrowth of the direction was to begin to travel to new groups to help riders gain harmony with their horses. We used the term “giving a clinic” for these events.

Looking back forty years to the school spring break in 1975, brings to memory one of the most interesting “clinics.”

Oreana is in Owyhee County, Idaho. The reason it was a choice site for a ‘clinic’ was the owner had built an indoor arena. Forty years later indoor arenas are not a rarity in Idaho. Weather in April can be unpredictable now and it was then.

In the early years we had developed a format for these clinics, seems like at least five colts to start, and up to ten, with eight being the most ideal number. These were usually an early morning until lunchtime activity. Sometimes lunch break could be quite late.Afternoons towards evenings was the time for the riders and their horses as a group. There were always individual problems, leading to special demonstrations.

These clinics were not held in “an eight to five” world. They were pretty much like ranch work, finished when the job was done. There were usually more folks watching than riding.

Early on, we had a policy of doing a free session for a youth group. We often did this before the main clinic. Usually this involved from a dozen to thirty-plus 4-H kids in a range of ages.

Oreana was especially interesting for me, because it was so “not California” and it involved one of the largest groups of 4-H kids in the widest age range Ray ever worked with in those early years.

We had issued our invitation to their leader, Marilyn Black, for the “Bruneau Sage Riders” to come to Oreana. They came in a two-ton 1970 Ford cab-over, with an 18-foot rack, loaded with nine saddled horses. They came ready to go to work. The driver looked young and capable. The crew looked even younger, but just as serious and ready for the day.

The gear could have included hand-me-downs from the century past with updates that indicated they knew where J.M. Capriola’s was in Elko, and had a current Hamley catalog.

There were other members arriving in other vehicles. So many came it impressed me as a complete club turnout.

What impressed me the most was their attitude. All these young riders seemed so eager to be a part of whatever was about to happen.

Paul Miller, one of the riders who came in the Ford cab-over, put it this way; “It wasn’t Ray’s first season in the area and we kids had heard some stuff, but, the truth is, we didn’t have a clue what to expect.”

They had come ready and in no time they were inside the arena. Introductions were quick, then Ray asked if anyone had a problem.

It did not surprise me which one came first. He was one of the younger riders, who had arrived “astride his saddled horse” in the Ford truck. Bret Black looked like a bundle of energy who had likely been told “not to” more than once, but it didn’t look like he’d ever been told “he couldn’t.”

He led his horse out to Ray in the center of the arena. He wasn’t shy about describing his dilemma. He said he was having trouble keeping up with the crew. He could get his horse caught, but then he needed to find something to stand on to bridle him because the horse raises his head. The young rider said he just couldn’t reach that high and it all takes too long and “everyone else is ready to ride!”

Ray agreed it sounded like a problem that needed fixing. Ray dropped to his knees beside the boy. Now the two of them were the same height. Ray took a firm hold on the bridle reins and the horse reacted with an instant head to the rafters motion.

The boy did the “I told you so look.” Ray grinned and began to show this young rider how to “make the wrong things difficult and the right things easy.”

For starters, he had the boy’s hands with his so the rider could feel how and what the horse was responding to. The young rider was “getting it.” Ray took his hands away. He stepped back just a bit, and within moments the horse had relaxed and put his head to the arena surface for Bret.

This spring, forty years later, I asked Bret about that day. His quick response was “I haven’t had a problem with that since. I’ve even helped other people!” Then like Paul Miller’s had done, Bret’s memory went to the horse loading event of the next day.

It seems what had aroused the kids interest most was the lady’s manner and her insistence that her horse could not be loaded into a horse trailer. She was so certain, she was ready to “bet the farm.” Ray did not buy into her “I’ll bet you” only responding with: “Just bring your horse, I’ll load it!”

This had quite intrigued the 4-H members. Most of the members came back to observe the clinic the next day. They got to see the horse who would not load – load! For the finale, the horse even “hunted up” the trailer on about 40 foot of rope, much to the amusement of the kids watching.

Even looking back forty years it is easy to see how these stockmen have appreciated their first “Ray Hunt Clinic.”

In the early years when answering an interview for a magazine, Ray made the remark: “I hope in thirty years, I’ll walk around the corner in some arena and a little 4-H kid will be using these ideas.” When you ask, “Where did you learn that?” the answer will be, “I don’t know, doesn’t everybody?” When Ray took Tom’s ideas on the road, it was to promote an idea that would help the horse and the rider, not to create idols.